In the run up to one of the most profitable events of the year, Christmas, food, presents and Christmas cards are everywhere. In America the average shopper plans to spend $704.18 (£448.29) on Christmas gifts alone. $403 (£256.62) of that will be spend on their children. However, food and gifts aren’t the end of it. $46.73 (£29.76) is spent on decorations and lights. And in a survey 87% of people said lights and decorations, help get them into the Christmas Spirit. You can find hundreds more horrifying facts about Christmas here.

As I was reading the Metro today, this story appeared about what people know about the Nativity Story and Christmas. It read:

However some children (that’s right, the people who squeal as soon as the Christmas adverts start showing on TV), are apparently a little confused as to what we are actually celebrating.

A recent survey found that one in five children believe Jesus Christ is a football player for Chelsea, rather then the son of God.

Several others also thought Rudolf the red-nosed reindeer was in the stable at the birth of Jesus (presumably these children were not among the ones who thought Jesus grew up to play on the left wing).

The survey was conducted in Brent Cross shopping centre in North London, and showed some serious gaps in the kids’ festive knowledge.

Half of five to 12-year-olds were under the impression that December 25 is Father Christmas’ birthday, and a third of children they spoke to got confused and thought Jesus was born in the South Pole.

Bosses at the shopping centre said they hope to improve knowledge of the nativity story in youngsters so they can ‘enjoy the festivities even more’.

The story can we read, emailed and downloaded here on the Metro website.

After releasing this story, the Metro did a survey and asked their viewers this question; 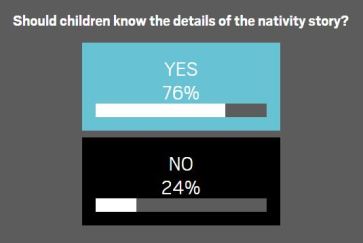 Welcome to RCGhub. RCG is a Christian blog with an aim to encourage people to strengthen their relationship with God. On this blog are a multitude of posts on a huge range of topics, written by our two Christian editors. If you don’t know where to start, we recommend the ‘Topic Series Links’ page at the top for an explanation of some of our most popular posts. We hope you enjoy!